What Does SFP Stand for in Networking?

Today, the SFP module is still used as an industry standard by manufacturers and suppliers worldwide.20 It has been an industry mainstay in many networks such as SONET, Gigabit Ethernet, Fibre Channel, PON and other communication standards for many years. This guide will explain some tips on SFP modules for beginners.

What is an SFP module?

An SFP module is simply a small modular transceiver that plugs into an SFP port on a network switch or server. SFP modules have replaced GBIC modules in most applications due to their small size, allowing them to be used in tight network spaces to provide fast communication between switches and critical network components. Furthermore, SFP transceiver modules are hot-swappable, which makes it easy to adapt existing networks without having to redesign the entire cable infrastructure.

Hilink 100BASE Copper Small Form Pluggable SFP transceiver module is compliant with the SFP MultiSource Agreement (MSA) and IEEE802.3u. With the hot pluggability, the module offers a flexible and easy way to be installed into SFP MSA compliant ports at any time without the interruption of the host equipment operating online. The Copper SFP transceivers use an integrated RJ-45 connector with transformer and PHY IC.

SFP modules are available in various types according to different classification criteria. It is available for copper or fiber optic. On the fiber side, there are singlemode SFP modules and multimode SFP modules, allowing users to choose the right transceiver for the optical range required by their network. 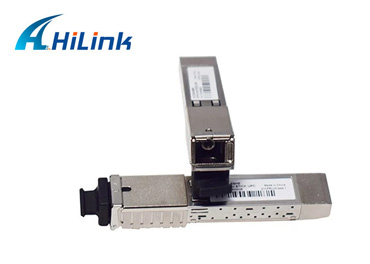 Can we use SFP hardware in SFP+ slots?

In many cases, SFP+ ports accept SFP fiber, but the speed drops to 1G instead of 10G. However, SFP+ fiber cannot be plugged into SFP ports because SFP+ does not support speeds below 1G. Also, almost all SFP+ ports on Cisco switches can support SFP, but many SFP+ ports on Brocade switches only support SFP+ optical.

Compatibility is often the parameter that users are most concerned about when purchasing an MSA SFP module. MSA (Multi-Source Agreement) is a protocol supported by many manufacturers who have come together to collaborate and standardize fit forms and attempt to provide a reliable means of successfully mixing and matching SFP brands. Third-party companies have also developed their own tools to program SFP modules to be compatible with OEMs. As a result, MSA-compatible SFP modules can be used successfully in most networks.

Previous:  How Do I Troubleshoot My Fibre Optic Transceiver?
Next:  OEM Optics vs Third-Party Transceivers: Which to Choose?