QSFP28 SR4 optical module is a parallel 100G optical module, which has the advantages of high port density and low cost. It follows the IEEE802.3ba standard and was officially released in 2015. It uses 8-core multimode fiber for parallel transmission. The module interface uses 12-core MPO (the middle 4-core is not enabled), and each channel supports 25G, which is consistent with the 40Gbase-SR4 interface. Conventional OM3 and OM4 multimode fibers can transmit distances of 70m and 100m. 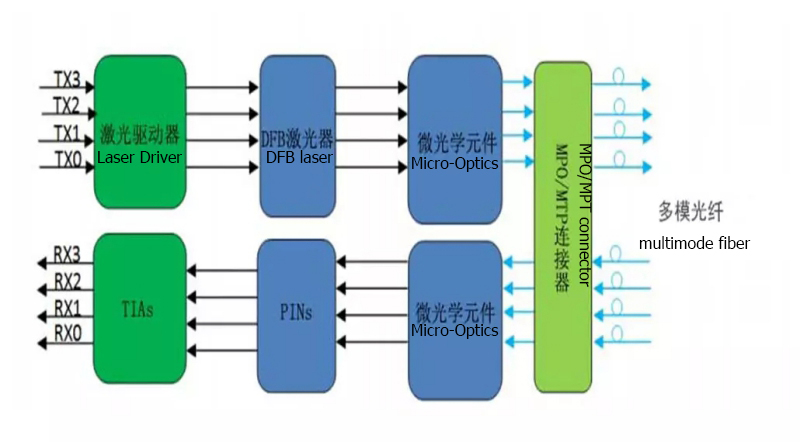 QSFP28 LR4 optical module is generally used with LC single-mode optical fiber cable. It converts 4 channels of 25Gbps electrical signals into 4 channels of LAN WDM optical signals and then multiplexes them into a single channel to realize 100G optical transmission. At the receiving end, the module demultiplexes 100G optical input into 4 LAN WDM optical signals and then converts them into 4 electrical signal output channels. The following is the working principle diagram of the QSFP28 LR4 optical module:

The QSFP28-PSM4 optical module is a high-speed, low-power product that complies with the PSM4 MSA standard, has a hot-swappable QSFP form factor, and has a built-in digital diagnostic function.

The QSFP28-CWDM4 optical module follows the CWDM4 MSA standard, adopts a duplex LC interface, and uses four central wavelengths of 1271nm, 1291nm, 1311nm, and 1331nm for optical signal transmission, and each band transmits 25G. Through the coarse wavelength division multiplexing technology, the above 4 wavelengths are used for transmission on single-mode fiber.

In order to ensure the stability of the optical fiber transmission system, the 100G-CWDM4-QSFP28 optical module must be used in an optical fiber link with forwarding error correction.

This module adopts the QSFP28 package, it is a kind of hot-swappable optical module, and the transmission distance can reach 2km when used with single-mode fiber. Compared with the traditional LR4 solution, the wavelength interval is increased, and uncooled DML is used as the light source, which has certain price advantages in 2km transmission applications.

The above information is provided by the transceiver supplier.