For the 100G-PSM4 QSFP28 package optical module, there is a new breakthrough in chip technology - Intel's silicon optical hybrid integrated 100G PSM4 optical module for data center scenarios has long been in mass production, and due to lower BOM (parts material) cost advantage occupies 80% of the market share of PSM4 products, mainly for 4-channel parallel single-mode solutions below 500m. 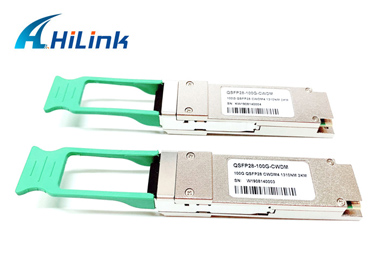 The current technology route of optical integrated commercial products is mainly divided into two camps, InP and Si. Among them, DFB, DML, EML, and other lasers are InP camp, although the technology is relatively mature, the cost is high, incompatible with the CMOS process (integrated circuit process), and its substrate material only doubles every 2.6 years.

Si silicon optical devices, on the other hand, use the COMS process to realize passive optoelectronics and integrated circuit monolithic integration, which can be integrated on a large scale and has the advantage of high density, and its substrate material can be doubled every 1 year.

The current 100G optical module has opened the door to silicon optical technology, but its development still faces some challenges.

First, a silicon-based integrated laser light source to be solved. Silicon is an indirect bandgap semiconductor, compared to direct bandgap semiconductors such as InP, silicon optical modules require the introduction of a separate light source, and the light source does not comply with Moore's law, the more coupling integrated the higher the cost, will continue to offset the cost advantages of silicon materials and process integration.

In the long run, silicon optical solutions are the trend, and will probably make a massive push in the 400G optical module era.

Previous:  How Can I Tell The Quality Of MTP/MPO Patch Cord Cables?
Next:  How To Check The Optical Signal Strength Of SFP Optical Module?