The 5G era has quietly arrived, and related technologies have developed rapidly, followed by the rise of 25G equipment. Compared with the traditional 10G interface, 25G cutting-edge technology can provide more bandwidth. As an important carrier of 25G technology, 25G optical modules have derived a variety of models that can cover different distance transmission requirements.

1. What is the maximum transmission distance of a 1.25G SFP28 optical module?

2. Can 25G SFP28 optical modules of different brands communicate with each other?

25G optical modules can communicate with each other as long as they meet industry standards.

3. Can SFP28 SFP28 optical modules be inserted into SFP+ ports?

If there are no special requirements for the port identification software settings, it is theoretically possible. The operating rate at this time is 10Gb/s instead of 25Gb/s.

4. Can the SFP+ optical module be inserted into the SFP28 port for use?

In theory, it is possible, but the actual operating rate is 10G.

5. Can SFP28 ports be interconnected with QSFP28 ports?

The answer is yes. Configure the 100G QSFP28 port on the device to 4*25G mode (if supported), then insert the 100G module into the port, and connect the SFP28 optical module in the SFP28 port through a one-to-four cable. 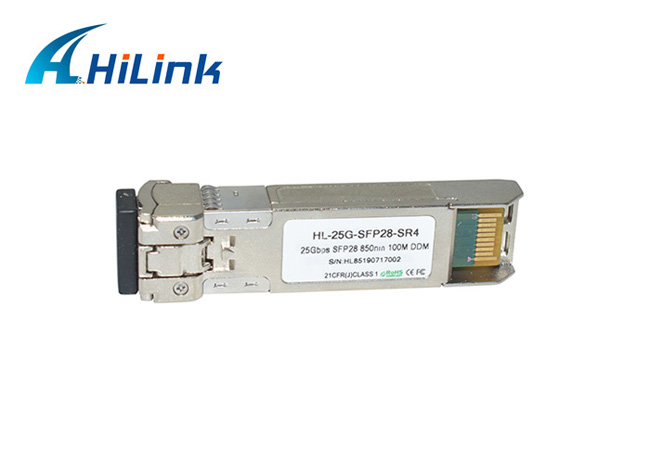 The 25G CWDM SFP28 optical module is a single-mode duplex CWDM module with a working wavelength range of 1271~1331nm. It can be used for short-distance data transmission in 25G Ethernet switches, routers, network interface cards (NIC), and storage network equipment. It can solve the 5G millimeter-wave fronthaul problem well at the current stage. The 25G DWDM SFP28 optical module currently on the market can transmit up to 10km through a single-mode fiber. It can increase the bandwidth and realize long-distance transmission.

Compared with the previous two 25G color optical modules, the 25G LWDM SFP28 optical module adopts high-performance and low-cost DML lasers and utilizes the LAN-WDM optical wavelength. It has become an ideal solution for 5G fronthaul and can meet a variety of fronthaul application scenarios. The product can realize passive wavelength division multiplexing and reduce fiber resource consumption. It can transmit 30km without forwarding error correction and 40km with forwarding error correction.