Media Converters Vs Switches: When To Choose?

Today, both media converters and network switches are vital in Ethernet networks. But they are different in terms of function and application. So, how do you choose a media converter or switch for your network? What is the difference between these two devices? Media converters vs. switches: this article explains definitions, transfer rates, installation, features, and a selection guide.

A media converter is a very cost-effective and flexible device used primarily to convert electrical signals in copper unshielded twisted pair (UTP) network cabling into optical signals for fiber optic cabling. It enables you to join different signal formats into a well-functioning LAN. Network switches play a central role in allowing wired network devices (computers, printers, and PCs) on a network to communicate with each other. The network switch is usually connected to a router and allows you to access the Internet via a modem. 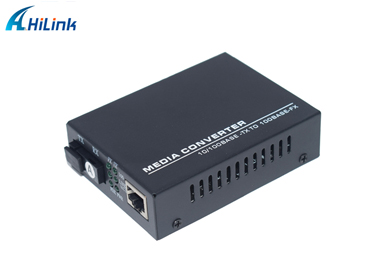 For fibre optic transceivers, 100M/1000M/10G transceivers are currently available on the market. Of these, 100M/1000M media converters are more frequently used and have become a cost effective solution for home and SMB networks. Network switches can be divided into 1G, 10G, 25G, 100G and even 400G switches to meet different data rate requirements. Taking large data centre networks as an example, 1G/10G/25G switches are mainly used in the access layer or considered as ToR switches. 40G/100G/400G switches are used as core or backbone switches. 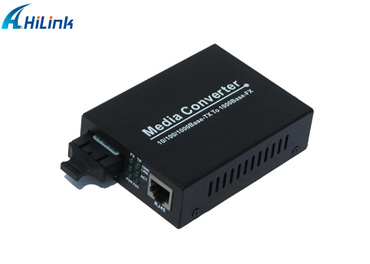 Media converters are simple network hardware devices equipped with fewer interfaces than network switches, making cabling and connections less complex. They can be installed on a desktop or chassis. As media converters are plug-and-play devices, installation is very simple: simply plug the appropriate cables into the copper and fibre ports on them and connect the cables to the network devices at both ends.

A network switch can be used as a stand-alone unit in a home or small office, or it can be installed in a rack for a larger network. Patch cords are usually inserted into ports on the network switch to connect computers or other network devices. In some high-density cabling environments, components such as patch panels, fibre boxes and cable managers are also used together to organise cables. For managed network switches, a configuration is also required to run features such as SNMP, VLAN, IGMP, etc. 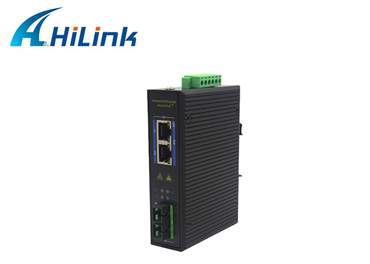 Copper-to-fibre and fibre-to-fibre media converters are two typical types of media converters. The former enables copper-based Ethernet devices to be connected via fibre links, thus extending the link over longer distances, while the latter provides connectivity between multimode and singlemode fibres, between dual and single fibres, and between standard conversion wavelengths (1310nm, 1550nm) to WDM wavelengths.

Compared to media converters, network switches are much more complex and are determined by the network operating system (NOS). They can be divided into Layer 2, Layer 3 and Layer 4 switches according to the network hierarchy. Typically, Layer 2 switches are the basic switches that transmit data and perform error checking on every frame sent and received. Layer 3 and Layer 4 switches have routing functions and can actively calculate the best way to send packets to their destination as well as other advanced functions such as MLAG, STP, VXLAN etc. 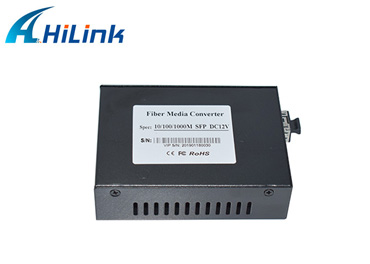 Media converters vs. switches: when to choose?

Fibre optic media converters and switches have something in common - both devices can be used to connect copper and fiber optic cables. So when do you choose a media converter or a network switch in an Ethernet network? The following sections detail some selection guidelines.

1. Fibre optic transceivers are often used in situations where Ethernet cables cannot be covered and where a limited budget necessitates the use of fiber optic cables to extend the transmission distance. They can be used for both local area networks (LANs) and cross-metro networks, such as connecting corporate and campus backbones.

2. Network switches have multiple ports for different devices (e.g. PCs and printers) to communicate within the LAN. In other words, network switches expand network capacity by adding more devices to the network. A network switch is a flexible network device that allows you to easily add more wired devices to your network. It also prevents traffic between two devices from interfering with other devices on the same network and allows you to control the network as required.

Previous:  How Are Transceiver Modules Classified?
Next:  All You Need to Know About SFP Transceivers